Clubs are available for players to join or create once they reach level 10. They can have a max of 30 players with 1 being the Leader who can talk to one another in chat about anything as well as request supplies. Clubs hold the Heart Basket which allows players to spin for the Club Kitties Room and additional supplies.

Clubs have a chat that functions in the same way as Global Chat. The members of the club can talk to one another as well as plan for Events. Swear words and other potential offensive words are auto censored with asterisks. Messages cannot be deleted though they eventually become inaccessible if they are pushed up the chat far enough as more messages are sent. Members of the Club can send requests for supplies if they are running low by going to the Common (blue) crafting items in Craft and tapping on “Request from Club!” This will make your request visible in the chat so players can tap on the request and press the “+” button (which can be held down to give 100s of supplies at once) to give their own supplies. After sending supplies, no more can be sent to the player until they make another supplies request. 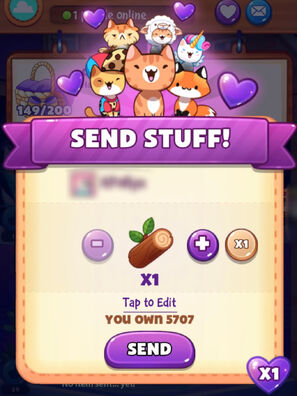 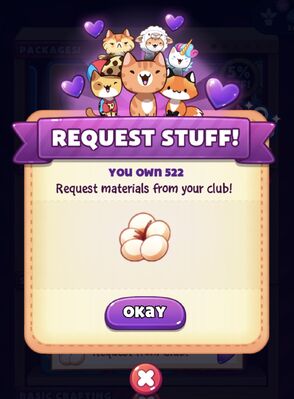 The Club Heart Basket is located at the top of Club Chat alongside the “Club Notice” which is updated by the Club Leader. The Heart Basket is able to be spun once 200 hearts have been collected by the player; collecting is done by pressing the purple heart icon at the top of the club and pressing “Collect” at the bottom. Though the max amount of hearts is technically 200, more than 200 hearts can be collected at a time which will allow the player to spin the Heart Basket multiple times at once. Hearts must be collected before 24hrs have passed since they were created by players.

Hearts can be created by either sending players supplies they requested, getting cats or decos from either the Premium Tower, the Regular Tower or the current Event, buying Flash Sales or purchasable rooms, levelling up or submitting entries to Contents in the Bank. VIP players doing these actions will give double the amount of hearts of regular players doing them. After 200 hearts have been collected, the player can spin the Heart Basket which will randomly give them supplies or a cat or deco from the Club Kitties Room:

Clubs can be created by players once they reach a level 10 where they can chose a name, design a unique logo and describe what kind of club they are. Clubs can be set to “Request Only” which means the club creator/Leader has to manually accept players request to join the club. Clubs can be advertised in the “Club Recruiting” Room Chat. Clubs are often created with the intention of being either causal, semi- competitive and competitive.

However, it is recommended to join an existing club instead of making one as there are so many clubs now that there’s not enough players to fill them up. Every club has a creator who is the Leader of the club. The Leader position can currently not be transferred and co-leaders cannot be added which means the Leader cannot leave the club. The Leader is responsible for keeping the club active, happy and organised. They can come up with strategies to complete events, update the Club Notice and kick players from the club if they are not meeting the club requirements or are breaking the rules. Players can leave clubs on their own for any reason, for example if they find the requirements are too difficult or just want to meet new players.

Retrieved from "https://cat-game-the-cat-collector.fandom.com/wiki/Clubs?oldid=5295"
Community content is available under CC-BY-SA unless otherwise noted.